How to Maintain a Friendly Dialogue Atmosphere

1 Peter 3:15 -- always be prepared to give a reasoned defense for the hope that is within you, yet with gentleness and reverence.

Skilled dialogue partners naturally expect their exchanges to be both fruitful and a delight. One reason for this is that they are selective about who they talk to—they are also selective about what they talk about. Yet another reason, which is the topic of this article, is that they have simply mastered their ability to monitor and tend to the atmosphere of their discussions.1

The common inability among Christians to protect the atmosphere when discussing controversial topics drives a leading misconception about apologetics, namely that “It's just arguing, and leads nowhere!” That is to say, believe it or not, experiencing or even seeing a skilled cordial apologetics discussion is truly a novelty for some Christians!

Regarding demeanor, the best (if predictable) nutshell advice to give newcomers to apologetics is this: strive to win your interlocutor's love and respect.2 This means treating him/her as a responsible fellow investigator, like yourself. (One recalls Jesus's command to treat others the way we want to be treated.) There is a lot of common sense involved in the implementation of this,3 but in the heat of the moment what is otherwise obvious can easily be forgotten, or at least can be extremely hard to implement. In addition to good ol' fashioned training and experience, the following three tips can help. Notice that they center around building and maintaining a cordial atmosphere.

Tip #1: Do not act self-assured

It is praiseworthy to be bold/fearless in preaching Christ,4 but in private apologetics discussions, acting self-assured about your controversial points is a turn-off.5 Apologists have different personality types, and so while some might be able to make it work, it will normally paint you as close-minded, which both discredits you and inspires in your partner a corresponding competitiveness.

Second, it sabotages your ability to fairly see/admit both the weaknesses in your reasoning and the strengths in your interlocutor's.

Third, it will tend to sabotage your interlocutor's ability to be fair as well, which debilitates the conversation further. It sours any fruit that might have come from the exchange.

As for how to not act self-assured, the more tense a conversation becomes, the more you should be employing these three principles:

• Speak slowly. Milk the fact that you are thinking carefully about your words before and as you say them.6 This makes it hard, awkward even, for your interlocutor to snap back and/or speak quickly to you.

• Disinvest in your position. For example, rather than simply asserting your conclusion or potentially controversial premises leading to it:
a) Learn to use hesitancy qualifiers, like, “It seems to me that xzy,” or, “I tend to think xyz,” or, “I want to say xyz.”7
b) Another wise way to make your assertions tentative is, when appropriate, to preface them with qualifiers like “ostensibly” and “prima facie.”
c) Finally, consider sometimes distancing yourself from your claims by prefacing them with, “See if you think this is a good argument/objection.”

• Avoid sledgehammer apologetics.8 Resist urges to overstate your case or preface your controversial claims with “obviously” and similar comments. You can give your partner a good argument and nevertheless, because of what philosophers call his background beliefs, it can actually be irrational for him/her to accept all your premises. 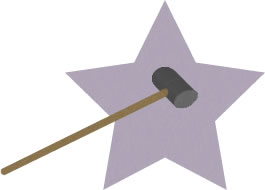 Why? Perhaps because he cannot rationally accept your conclusion—for one reason or another it seems too absurd to him. In these cases, the individual is not necessarily being dishonest or unfair. He/she just can't help it. Simply ask him/her to concede that your argument provides "some evidence, even if not sufficient evidence" and then move on.

Admittedly, doing this can be hard, especially when you strongly feel your interlocutor is being obtuse or overtly unfair and resistant to a point you have made. In these moments, it will be tempting to declare in the most annoyed voice you can muster, “you're being ridiculous!” Here is a preferable alternative which allows you to express yourself without being too condescending: “I feel you are not granting me as much as you should on this point.” If you absolutely feel the need to communicate this even more strongly, you can say something like, “I think that if we polled one hundred rational people on this, that virtually all would agree with me. But I'm sure you disagree, so I'm not sure what else to say. Let's move on.”

No one likes to feel inferior. Especially as things tense up, as much as possible help your partner preserve his/her dignity. As you converse, give compliments, points, concessions, apologies, anything that helps him/her to feel permitted to give concessions back. Here are three good habits:

• Agree often: As he/she develops her arguments, nod your head to the agreeable points, sometimes slipping in a quick “yup,” “mhmm,” “right,” or “sure.”

• Concede often: As he/she substantiates even a minor point in his/her case, don't let the opportunity pass to say “That's fair” or “I see what you mean.”

• Apologize often: Find things to apologize for (put the apologize in apologist). For example, if you asked “Do you mean x” and are given even the slightest correction, apologize (“Oh, sorry, right” or “Ah, my bad” or “Oops! ok, thanks for the correction.”)

This is an essential part of connecting and sympathizing. More importantly, it encourages your dialogue partner to reciprocate—this means they will try harder to understand you. Here are three tips:

• Diagnose well. You should be deeply inquisitive, regularly asking clarifying questions. Show a desire to master comprehension of their point of view. This means tentatively repeating back their points, signaling for approval (“So you mean xyz?”), as well as using all the non-verbal cues possible that denote you are listening intently and carefully.

•  Be overly charitable. Unskilled dialoguers habitually restate and/or critique their partner's arguments in a weaker form. This is pointless. The “uncharitability” (making his/her argument appear less rational, and by extension him/her) will cost both of you time, and you will have only purchased annoyance. Instead, prove you can step in their shoes; flaunt the fact that you are struggling to see things their way. If you really want to win their love/respect, restate their own argument rhetorically and/or logically better than they did, eliciting a “yeah, yeah, exactly!” The goal is to foster a spirit of teamwork and discovery. Regardless, there should be no intense competitiveness or awkwardness, just a mutually welcoming curiosity and hard questions.

•  Avoid Psychoanalyzing. Skilled questioning can expose any overt “emotional problems" underlying an interlocutor's resistance to Christianity. If emotional problems are not overt, then do not assume they exist at all. At least for the discussion, assume they are not lying about their disbelief or reasons for disbelief.

Here is something healthy to keep in mind: if it would be awkward at any point for either party to invite the other for a meal, then something has gone wrong in your conversation. Either the dialogue needs to cease (it is not necessarily your fault) or you both need to prioritize the recovery of a cordial atmosphere. If you employ these principles, however, you should find that the conversation goes awry far less often.